The young woman, who acts both as the main character and the narrator of the stories, goes back to her childhood and recreates selected scenes from her everyday rural life. The staple that binds all the stories together is the figure of her grandmother, who influences the narrator’s perception of the world, as well as the matter of the language itself. In Ciasto (A Cake), the act of baking pastries prompts the narrator to reflect on here and now, permeated with the traces of those who had already passed away. Burza (The Storm)talks about the experience of anything that a human being finds mysterious, dangerous and untamed. The events in Lustro (The Mirror) take place in two time frames to demonstrate the changes in the landscape of contemporary villages. The imaginary countryside is confronted with the narrator’s perspective.

Wacław Oszajca (in collaboration with Rafał Strugiński): To Materialize Tenderness / 22

Posing a question in her Nobel Prize speech about the identity of the narrator of biblical books, Olga Tokarczuk referred to the category of tenderness, which allows us to see the world as a coherent whole, and to see strong ties between people and their surroundings. Wacław Oszaj­ca claims that although the very term “tenderness” does not appear in Polish translations of the Old and New Testaments, there are words that clearly refer to the interrelated sentiments. Therefore, tenderness can be perceived as a kind of specific sensitivity proper to God, and, at the same time, to a man himself, created in the image of God. Tenderness allows you to open yourself selflessly to others, to divest yourself of selfishness and to help those who are in need. In such a context, where tenderness leads to a merciful acceptance of otherness, it becomes justified to pose questions about the possibility of saving all creation, including Satan himself.

An extensive fragment of the story, whose leitmotif is the fascination with the works of Isaac Babel. The narrator knows his books inside out and feels an almost friendly bond with the characters. The second plane features the theme of the journey in several aspects. First of all, it is a real journey, understood as a physical movement from place to place: by plane, by train, by tube. Secondly, it is a mental journey – into the past, through the memories of adolescence, recalling the first literary attempts. It leads up to childhood, immersed in the world of imagination and marked by an intense feeling of loneliness, which turns out to be the only truth about human life. Thirdly, it is the journey of the mother, a “country girl”, to her only son, the narrator, while he was a student in the city of Lublin.

An essay devoted to the life and work of Kazimierz Wyka – an outstanding literary historian, literary critic and essayist. Wyka’s diverse and extensive literary output proves not only his extraordinary range of interests, analytical passion and enquiring mind. It is also, especially from today’s perspective, a faithful testimony of the times in which it was created. Wyka was an active participant and a keen observer of Polish political and social life from the 1930s, through World War II, to the decline of the People’s Republic of Poland. Only if we know the realities of those times, are we able to understand Wyka’s work, life and worldview choices – including his dislike of the Sanation regime in the interwar period, the reasons for supporting the post-1945 authorities with their cultural policy, and the disappointment with its results in the following decades. The text was inspired by the publication of Wyka’s works in the National Library series edited by Paweł Mackiewicz.

A story set in the fictional town of Pepperwood, Tennessee, in the 1920s. Its protagonist is Elizabeth Stone, who lives alone on a farm, expecting nothing from life and aware that over the years she has become the object of gossip and mockery of the townspeople. When one day a mysterious stranger shows up on her farm and offers to work for her in return for food and shelter, the woman takes a risk and agrees to take him in. With time, it turns out that Elizabeth and the stranger share more than loneliness and a sense of being outcasts – they also have a common enemy.

Łukasz Marcińczak: Transatlantyk is Boarding, and You don’t Get On, Sir? / 89

The starting point of the text is a conversation between Witold Gombrowicz and Wacław Iwaniuk in Argentina just after the outbreak of World War II. Since then, Gombrowicz had been labeled a “draft dodger”. The author of the essay juxtaposes the subjective reasons of Gombrowicz with those of Iwaniuk – a soldier, poet, translator and essayist, who believed that it is the duty of a Pole to constantly accompany his homeland with his work, also in exile. In the text, apart from the considerations on two extreme varieties of patriotism, we also find a juxtaposition of two literary strategies. While Gombrowicz sought translations and the global resonance of his cosmopolitan writing, Iwaniuk distanced himself from the latest literary quests and fashions. Instead, he tried to explore the essence of his own fate of the expatriate.

The report of the celebrations of the 40th anniversary of “Akcent”. The journal was created on the wave of spontaneous, democratic changes that took place in Poland in 1980. The ceremony took place on June 30, 2020, at the Center for the Meeting of Cultures in Lublin, with the participation of guests from Poland and abroad, including: Prof. Piotr Gliński, Deputy Prime Minister and the Minister of Culture and National Heritage; His Excellency Prof. Stanisław Budzik, the Archbishop of Lublin; Her Excellency Mrs. Orsolya Zsuzsanna Kovács, the Ambassador of Hungary to Poland; Robert Dmitruczuk, Deputy Voivode of Lublin; Zbigniew Wojciechowski, Deputy Marshal of the Lublin Province; Dr. Krzysztof Żuk, Mayor of the City of Lublin; Consul Switlana Horbowska of the Consulate General of Ukraine in Lublin; Birutė Jonuškaitė from Vilnius, Chairwoman of the Main Board of the Lithuanian Writers’ Union; writers, artists, editors and readers of “Akcent”. In the second part of the evening, the Gardzienice Center for Theater Practices staged Oratorium Pytyjskie (The Pythian Oratory), dedicated to “Akcent”. The performance was directed by Włodzimierz Staniewski and preceded by his introductory words. In the publication we present the selected photos from the ceremony, a record of congratulatory letters from individuals and institutions, as well as a transcript of the panel discussion entitled Na pograniczu narodów i kultur – ze wschodniej perspektywy (On the border of nations and cultures – from the eastern perspective), which was the focal point of the ceremony.

The discussions of the latest prose books written by literary scholars and critics. They contain detailed analyzes and characterize the most important contemporary literary trends and phenomena.

The article is devoted to the work of Włodzimierz Borowski, one of the most important Polish artists of the 20th century. His work appears to be a consistently implemented program of reinterpreting the principles of modernity and avant-garde, related to the linear time of progress and the civilization’s mastery of space. Borowski transcended the institutionalized artistic craft. He reached for alternative cultural patterns and a wide repertoire of activities of Dadaist and surreal origin. He realized his assumptions by applying the principle of metamorphosis and the effect of the extraordinary. He exposed the “startling” nature of things, blurring the line between the animate and the inanimate worlds. He marked a separate trend on the Polish art scene – the distance from visual propaganda, but also suspicion towards an autonomously understood artistic object. He negated completeness, perfection and mastery in his projects, and instead practiced recycling and deskilling as special activities reducing the invasiveness of culture and the established technical and civilizational competences.

An interview with Hanna Grodzka-Nowak, author of illustrations for children, aims to demonstrate her artistic development in the course of time. Grodzka-Nowak made her debut in „Świerszczyk”, a magazine for early school children, published since 1945 in Warsaw. Working on a text is an “intimate experience” for her, because it requires reaching into her own interior. The illustrator thoroughly analyzes the content of a given book and looks for funny fragments that she brings out. For many years, Hanna Grodzka-Nowak was the editor of „Miś”, an iconic monthly for preschool children published in the years 1957-2010 in Warsaw. In the interview, she presents the history of the magazine and mentions outstanding writers and graphic designers with whom she had cooperated.

The essay presents basic information about the genesis, program and structure of Freemasonry in Poland and Europe. The profiles of Stanisław Kostka and Ignacy Potocki as the most outstanding activists of Polish Freemasonry associated with the Lublin region in the times of Stanisław August and at the beginning of the post-partition era were presented. The main part of the text is the description of the formation and operation of Lublin Masonic Lodges in the first half of the 19th century: Regained Freedom, the Temple of Equality and True Unity. After the secret organizations had been dissolved by the authorities of the Kingdom of Poland, the Masonic movement in Poland was restored after the revolution of 1905-1907. The Free Ploughers Lodge (1912-1916) was established in Lublin at that time, bringing together the intelligentsia associated with the independence movement.

Marek Danielkiewicz: When I Feel Worse, I Chill in my Porsche, or the Songs about Strong Women and Weak Men / 196

Józef Fert: Wasyl Polesiak – A Man of the Borderland or a Sophisticated Storytelling / 199

Information on well-known artists and cultural phenomena, as well as discussions of the most interesting initiatives, events and publications from the past few months. 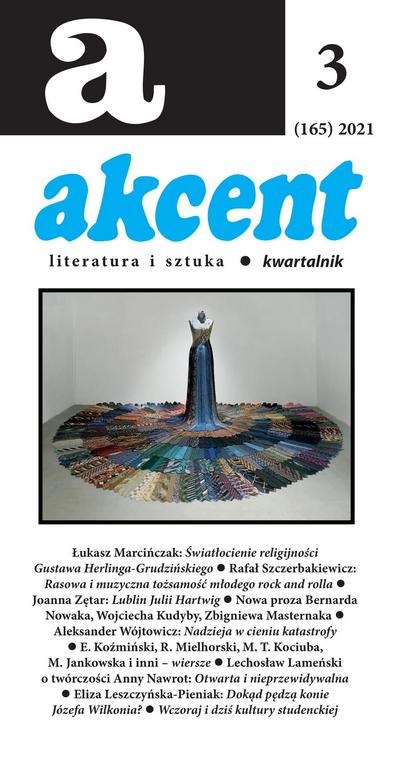