The year of 1852, marshes near the village of Koterka in Podlasie (present-day Belarus). Wania, a boy from the village, drowns in a swamp, which becomes the beginning of a series of magical events affecting Koterka and its inhabitants. Euphrosine Iwaszczuk, gathering sorrel in the wilderness, experiences a vision, during which Maria, the Mother of Jesus, threatens to send an epidemic to the whole village. In the church there is a dispute about the authenticity of Euphrosine’s view, and the cross set up at the miracle site is removed. The villagers are visiting the site where a magical spring with water healing disease started to flow out. Wania’s parents want to bring the boy back to life thanks to the magical power of the holy water and their faith.

Jan Kreft: In the Black Box of Hate Speech / 15

Lies, fake news and hate speech are the tools often used in relatively inexpensive campaigns, which are widely available and used forms of online activity. Technological companies play a dominant role here, as their responsibility for distributing such practices is in inverse proportion to the benefits derived from each manifestation of traffic in the media ecosystem they manage (which also refers to traffic driven by fake news or hate speech). The mechanisms of functioning of information portals and websites as well as social media – despite appearances of their objectivity and neutrality – are difficult to understand. At the same time, we are dealing with arrogant grand visions of posthumanism à la Facebook and Google, according to which a rhetorically empowered man is the object of endeavors aimed at his wellbeing, and the issues of tolerating hate speech, its diffusion and making money on it are treated as burdensome, but natural and marginal “side losses” incurred in the name of progress.

Piotr Mitzner: Under the Eyelids / 30

Short pieces bordering on poetic prose, showing the world seen through the eyes of a child.

The first part of the article devoted to the work of Danuta Mostwin – the greatest Polish émigré novelist (she lived abroad continuously from the time of World War II until her death in 2010), as well as a sociologist, the author of the important work Trzecia wartość [Third Value], describing the spiritual condition of immigrants. The text focuses primarily on the novels which make up the cycle …ani o ziarno jęczmienia mniej… (… not even one barley grain less…). Contrary to Mostwin’s declarations, which had been changing over time, and in opposition to the statements of some critics, the novel Ja za wodą, ty za wodą (Me off the Water, You off the Water) (1972) as well as the essays, sketches, diary entries and short fiction forms, which the author included in the volume Słyszę, jak śpiewa Ameryka (I can Hear America Sing) (1998), were not considered a part of the aforementioned cycle. The analyzes highlight the specific autobiographical character of this prose, and also characterize the most important motifs and ideological meaning, emphasizing patriotism and the peasant roots of the characters depicted by the writer.

Pericles, a black teenager, sells water on the streets of the Ecuadorian city of Guayaquil. He lives with his mother and two brothers. The relationship with the elder brother is tense as the boy suspects him of drug trafficking. On his way home, Pericles is observing prostitutes waiting for clients. His attention is attracted by a woman of about forty with a slightly “motherly” appearance who is called a ‘Mexican’ because of her origin. Pericles wants to meet her and asks his older brother for money, but the brother acts dishonestly. After this episode, the young man eavesdrops on a Mexican during her meetings with clients. One day he sees her coming out of the hotel with his best – as he had thought so – friend who had laughed at her before. In a fit of jealousy, he lunges at him with his fists.

Malwina Mądra: Space Writing. On the Work of Andrzej Stasiuk / 67

The text is devoted to the issue of space and place in the selected works of Andrzej Stasiuk. The author analyzes the writer’s work in the context of geopoetics, referring to Kenneth White or Elżbieta Rybicka. In her interpretations, she takes into account the metaphoricity and synesthesia of the literary descriptions of space. In Stasiuk’s novels and short stories, the notions such as “emptiness” and “nothingness,” “sacred” and “profane,” “initiation” and related places, including family home, church, library, and road play an important role. The places important for the characters affect their identity, the sense of belonging and attachment to the world, and constitute one of the elements shaping their childhood memories. The author also refers to Stasiuk’s texts which are accounts of his travels and reflections on experiencing space.

A story-postcard about love and misunderstanding. In a small Chinese restaurant, the couple are talking at a table, waiting for a meal. When the cook calls out that the food is ready to pick up, the boy absorbed in the conversation with his partner ignores the call, commenting on it in his own way.

The poet Kazimierz Brakoniecki brought from his two-week stay in three French cities (Paris, Bordeaux, Lyon) in the early autumn of 2018 a pocketful of tourist experience and philosophical reflection. He linked them in an intimate-literary journal. In addition to visiting the streets, museums, and monuments, the poet found time to observe people, reported some historical events, and referred to the French and the European culture and civilization. He considers himself a Cosmopole, for whom both native Poland and friendly Europe are necessary to open up to the cosmic show of life.

The discussions on the latest prose books written by literary scholars and critics. They contain detailed analyzes and characterize the most important contemporary literary trends and phenomena.

The author distinguishes and analyzes the three basic stages of the creative path of Tytus Dzieduszycki-Sas (1934-1973) – a descendant of the aristocratic Dzieduszycki family, co-founder of the Lublin artistic group “Zamek” (“Castle”) – focusing especially on his years of emigration. The first period, associated with the Lublin avant-garde formation from the late 1950s – the “Zamek” group, marked a breakthrough in the understanding of visual form and the moment of entering the path of experimental solutions on the border between abstraction and the art of the object. The second period was defined by the artist’s activity in Paris, developed as a part of the international post-surrealist movement called “Phases.” The third stage was initiated by the cooperation with modernist Parisian architects gathered around Roger Anger. Its culmination was the participation of the Polish artist in the pioneering project of the ideal city of Auroville in India. Despite his short life, Dzieduszycki left behind a substantial number of considerable artistic achievements, which situates him both among the extraordinary artists of the Lublin avant-garde, as well as among the most interesting Polish artists active in exile after the Second World War.

Jan Lewandowski: The Union of Lublin – The Roots and its Fruits / 139

The text outlines the course and the consequences of the Polish-Lithuanian unions: from the Act of Kreva (1385) to the Union of Lublin (1569). The author indicates both the positive and negative consequences of this political treaty, beginning in the 16th century and ending in the 20th century. The positive effects included the inhibition of Russian expansion, with the tsarist system of absolute rule, for two centuries. The negative sides were: stopping reforms aimed at strengthening the Polish state and its gradual anarchization, resulting from the activities of magnates from the eastern territories of the Polish-Lithuanian Commonwealth, joined to the Crown in 1569. After the fall of the Polish-Lithuanian Commonwealth, in the era of the emergence of modern national movements that shaped today’s political map of Europe, the social conflict between the polonized former Lithuanian, Belarusian and Ukrainian elites and the peasants who retained their ethnic separateness, also acquired a national character. The goal of Lithuanians, Ukrainians and Belarusians, who sought to build their own nation-states, was to break free from the foreign – in this case Polish – cultural, material and political domination. In the 20th century it resulted – more or less tragically – in the elimination or marginalization of the Polish population in these areas.

Eliza Leszczyńska-Pieniak: Brzechwa Depicted, or the One who Buzzes in the Reed / 147

An overview of the exhibition of book illustrations presented during the Capital of the Polish Language Festival in Szczebrzeszyn. The author draws attention to the diversity and multi-layeredness of the graphics created for the works of Jan Brzechwa. She also mentions how the styles and the ways of creating book graphics have changed since the 1930s to the present.

The city as a cultural phenomenon is subject to deliberation and critical reflection, and its space and its meanings are subject to problematization, revision, and often contestation. An attempt to create a metaphor for a postmodern city leads to its presentation as an archipelago. The city understood as an archipelago is – according to the idea of ​​Massimo Cacciari – a space in which its center/middle disappears, the balance of social structure is disturbed and the dominant culture cannot be designated. In the urban archipelago one can find “places”, “non-places”, “emptiness”, “fragments”, “events” and “manifestations of being.” The text is an attempt to analyze some elements of the archipelago city on the example of Lublin.

Jan Wł. Woś: Leonardo Bruni and the Beginnings of Humanism / 169

Jan Władysław Woś – a historian, researcher of Polish-Italian relations, publisher of sources for the history of Poland and the history of the Church, bibliophile, collector, professor emeritus of Eastern European history at the universities of Pisa, Venice and Trento – characterizes the beginnings of humanism in Florence. They were associated, among others, with the opening of the school in which the Greek language was taught by a Byzantine scholar and diplomat Emanuel Chrysoloras from Constantinople (the basis of his teaching was Erotemata, the Greek grammar of his authorship, developed in the form of questions and answers – the first didactic text in the history of Western Europe for learning Greek). Earlier, no one in Western Europe could read the works written in this language. The author also writes about Leonard Bruni (1370-1444), an Italian humanist, historian, pioneer of Renaissance historiography, politician, diplomat, one of the greatest Latin writers of the 15th century and translator and propagator of Hellenic philosophy and literature, who translated the texts of Plato, Aristotle, Plutarch, Demosthenes and other Greek authors.

Adrianna Pierepienko: “You Gave me a Black Soup,” Meaning Love, Emotions and Language / 182

Information on the well-known creators of culture, as well as the most interesting events, publications and artistic activities from the past few months. 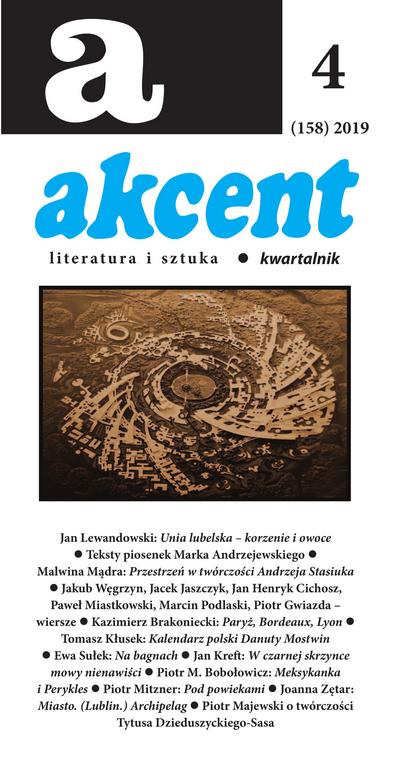