Jan Lewandowski: “From the Air, Hunger, Fire and War…”. Collective Misfortunes in the History of Europe, Poland and Lublin / 10

The essay deals with the most common elemental disasters that have plagued human societies for millennia. Disease outbreaks, periods of famine, wildfires and wars with many civilian casualties often coexist in a cause-and-effect relationship. From antiquity, through the Middle Ages to the 21st century, they caused the death of millions of people, among whom there were many outstanding figures, who had a lasting impact on the history of mankind (Pericles, Alexander the Great, Hegel). Against this background, the natural disasters that plagued Lublin and the Lublin region since the 17th century until the beginning of the 20th century have been presented. In the last sections of the essay the author makes an attempt to reflect on the experiences of the humankind related to elemental disasters. What lessons (if any) can be drawn from these experiences?

Raisa Stepanovna, who is a pensioner, lives in a block of flats. Since early morning she has been hearing sounds coming from behind the walls and from the outside. While her husband is at work, she stays home alone. Her older son Kola – a difficult child – committed suicide at the age of 14. Two years later, Raisa’s daughter Lala was born. Lala was a sensible girl, today an adult woman, a mother of two girls, living abroad. During her daily visit to the store, Raisa tells two of her neighbours about the haunting noises. She confides in them that her son Kola has been visiting her for some time. He does not say anything, but Raisa is worried that someday Kola will speak to her, yet she will fail to hear it because of the noise.

Jerzy Bartmiński: On Taming Strangeness. The Polish View of the World in the Loan Words / 37

The author joins the discussion on the role of loan words in shaping the linguistic image of the world. He asks about the status of expressions (words and their collocations), which in the process of translation pass into a new (appropriating) language and are subject to a multi-stage process of assimilation. The author makes a short review of lexical borrowings in Polish in terms of the degree of assimilation. He focuses on the reception of biblical phraseologies (Tower of Babel, the prodigal son, Cain’s crime) and finally formulates a key thesis about the existence of the sphere of “tamed alienation” in language.

A science fiction story by a Ukrainian prose writer, essayist, translator and publisher. The action takes place in an alternative reality. The protagonist, traveling on a transcontinental express to New Cairo, smuggles synthetic plants growing in his own body, which is punishable by death. During the fourteen-day journey, he manages to outsmart the train’s security systems and eliminate the agents who threaten his venture. After reaching the destination, it turns out that David was also transporting something much more unusual than these synthetic plants.

A sketch devoted to the work of a lyrical poet and painter Danuta Agnieszka Kurczewicz, associated with the city of Chełm and the nearby Pawłowo. Kurczewicz is the author of ten volumes of poetry. She made her debut with the collection W galaktyce czasu (In the Galaxy of Time) in 2008, three years after her retirement. Her substantial creative output, varied in terms of themes and forms, is a testimony of extraordinary imagination. A special role in the poet’s work is played by the need to maintain creative and personal freedom. This is contrary to the tendencies so frequent today to systematize and control all manifestations of human existence. As the author of the essay states, this poetry is a work of “wild imagination”, impossible to organize, reflecting the richness of our reality, or, in other words, “Chaosmos” resulting from the Big Bang.

Paweł Kozioł: Add a Lion and a Wheelbarrow to my Commission / 78

An excerpt from the Maestro novel. Its title character and narrator is a chess grandmaster, a Polish Jew, who represents his country at the Chess Olympics in Buenos Aires. After the great tournament success, the champion had nowhere to come back to since the games took place in August and September of 1939. In the chapter “Dorzuć do mojej pro­wizji lwa i taczki” (“Add a Lion and a Wheelbarrow to my Commission”), while struggling to start a new life in Argentina, the protagonist falls into a shady company. His new companions are represented by Pedro, shown here as a black market dealer, although his role will later turn out to be more prominent. The gentlemen tell each other strange stories: Pedro – about the lion guarding his warehouse, the narrator – about alcoholism and the strange treatment method applied to the world chess champion (an unnamed protagonist, impersonating Alexander Alekhin).

Janusz Kukliński is a friend, a founder and custodian of Edward Stachura’s personal museum, a mentor to many Lublin artists, a founder of Poetycki Zakład Ogrodniczy (Poetic Horticultural Company), which gathers several hundred people from all over Poland. The publication of his poems is accompanied by a biography written by Edward Kukliński, the poet’s son, and the memoirs of his friends: Jurek Tabor, currently a resident of Florida and a cultural activist among the Polish community, including the American-Polish Club “Sobieski” in Greenacres, and Jan Kondrak, author of lyrics, composer and performer, one of the leaders of the artistic formation Lubelska Federacja Bardów (Lublin Bard Federation).

Discussions of the latest poetry books written by literary scholars and critics. They contain detailed analyzes and characterize the most popular contemporary literary trends and phenomena.

A memoir about Marian Makarski. He was an architect by education, and a writer, art critic and scientist by passion and belief, as well as an intriguing painter artist. Fascinated by the works of Polish colorists, as well as the paintings of Marc Chagall and Jerzy Nowosielski, he created his own original and unique style. He loved the pulsating varieties of reds, the varied browns and yellows, and the wide variety of blues; he painted with panache, using clear impastos. Makarski mostly preferred the compositions with clear literary overtones, especially the stylized visions of small, abandoned towns. His works brimming with tasteful aesthetics are characterized by a perceptible mood of reflection over the passage of time. The artist was also keen on painting the eye-catching flower still lifes, which were very popular with his audience.

Alina Kochańczyk: “My Art is Myself.” In Memory of Marian Makarski / 134

A text in memoriam of Marian Makarski (he passed away in May this year), an architect, painter and writer who had taken an active part in the cultural life of Lublin since the post-war period. He functioned in the most important creative circles of the city and in each of them he was highly appreciated – among artists, architects, writers, journalists, and theatre performers. Reflecting on her friendly relationship with Makarski, Alina Kochańczyk recalls his long-lasting ties with “Akcent” and paints a sketchy portrait of an outstanding artist and a man with an interesting individuality.

Magdalena Jankowska: Landscape with a Raven. 50 Years of Scena Plastyczna KUL (The Visual Stage of the Catholic University of Lublin) / 141

For fifty years, Leszek Mądzik has been running his own artistic theater, Scena Plastyczna KUL (The Visual Stage of the Catholic University of Lublin), in which he has created over twenty performances. On the occasion of the jubilee, Mądzik staged Kres (Verge) – a performance of no words, based solely on the visual effects and music. Its recurring theme is the destructive flow of time and the alternating rhythm of life and death. This time, the central motif is a tree trunk with which people and birds intertwine into a symbiotic whole. The trunk’s vital force is overshadowed by the background symbols of vanitas. However, the warm light above them brings out eschatological hope.

Keywords: Leszek Mądzik, Scena Plastyczna KUL (The Visual Stage of the Catholic University of Lublin), the destructive passage of time, “life towards death”

A section dedicated to Bohdan Zadura and István Kovács, who are celebrating their 75th birthdays this year. Zadura is a poet, prose writer, literary critic, translator of several literatures, mainly English, Hungarian and Ukrainian, the latter being the focus of his creative activity for several years (the current issue of “Akcent” features his translation of a short story by Roman Małynowski). The artistic portrait of Zadura is presented by Bogusław Wróblewski, a literary scholar and editor-in-chief of “Akcent”. Kovács is a poet, prose writer, essayist, historian and diplomat (active in Poland in 1990-2003 as a cultural counselor at the Hungarian Embassy in Warsaw and Consul General of the Hungarian Republic in Cracow), a long-time lecturer at the Eötvös Loránd University in Budapest. Kovács is a key figure of two essays by Csaba G. Kiss, a Hungarian literary scholar and cultural historian, co-founder of the Hungarian Democratic Forum, and Teresa Worowska, a Polish Hungarian philologist and highly regarded translator from Hungarian. The presentation is accompanied by the latest poems by István Kovács translated by Jerzy Snopek and Daniel Warmuz and a recollection of Bohdan Zadura’s poetry debut.

Jan Władysław Woś: A Polish Collector from the Thames Józef Jarzębowski, a Marian / 159

Among the papers left by Samuel Tyszkiewicz, a typograph operating in Florence and Nice, there is a letter from Józef Jarzębowski, MIC, a well-known youth educator and collector, especially of documents related to the January Uprising. In 1950, Jarzębowski visited the Tyszkiewicz family in Florence. A year later he sent Christmas greetings from Hereford, informing them about some new acquisitions to his collection, including Adam Mickiewicz’s autograph and Jan Łaski’s Statute from 1506, as well as a volume with documents about Romuald Traugutt which was his work in progress at that time.

Marek Danielkiewicz: In Praise of the Trans-Siberian Railway / 163

Information on the well-known creators of culture, as well as the most interesting events, publications and artistic activities from the past few months. 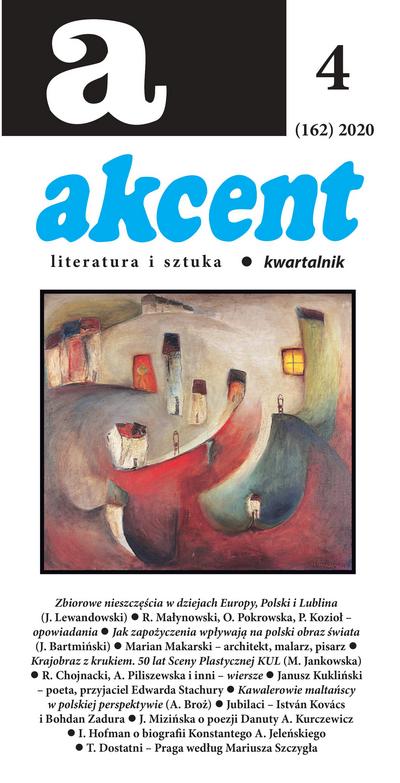